Thinking about compliance is important. You might randomly assign people to receive treatment or a program, but people might not do what you tell them. Additionally, people might do the program if assigned to do it, but they would have done it anyway. We can split the population into four types of people:

To simplify things, evaluators and econometricians assume that defiers don’t exist based on the idea of monotonicity, which means that we can assume that the effect of being assigned to treatment only increases the likelihood of participating in the program (and doesn’t make it more likely).

The tricky part about trying to find who the compliers are in a sample is that we can’t know what people would have done in the absence of treatment. If we see that someone in the experiment was assigned to be in the treatment group and they then participated in the program, they could be a complier (since they did what they were assigned to do), or they could be an always taker (they did what they were assigned to do, but they would have done it anyway). Due to the fundamental problem of causal inference, we cannot know what each person would have done in a parallel world.

We can use data from a hypothetical program to see how these three types of compliers distort our outcomes, and more importantly, how we can disentangle compliers from their always- and never-taker counterparts.

First let’s load the data and reorder some of the categories:

This is what we would be able to see if we could read everyone’s minds. There are always takers who will use a bed net regardless of the program, and they’ll have higher health outcomes. However, those better outcomes are because of something endogenous—there’s something else that makes these people always pursue bed nets, and that’s likely related to health. We probably want to not consider them when looking for the program effect. There are never takers who won’t ever use a bed net, and they have worse health outcomes. Again, there’s endogeneity here—something is causing them to not use the bed nets, and it likely also causes their health level. We don’t want to look at them either.

The first group—the compliers—are the people we want to focus on. Here we see that the program had an effect when compared to a control group.

This is what we actually see in the data, though. You can tell who some of the always takers are (those who used bed nets after being assigned to the control group) and who some of the never takers are (those who did not use a bed net after being assigned to the treatment group), but compliers are mixed up with the always and never takers. We have to somehow disentangle them! 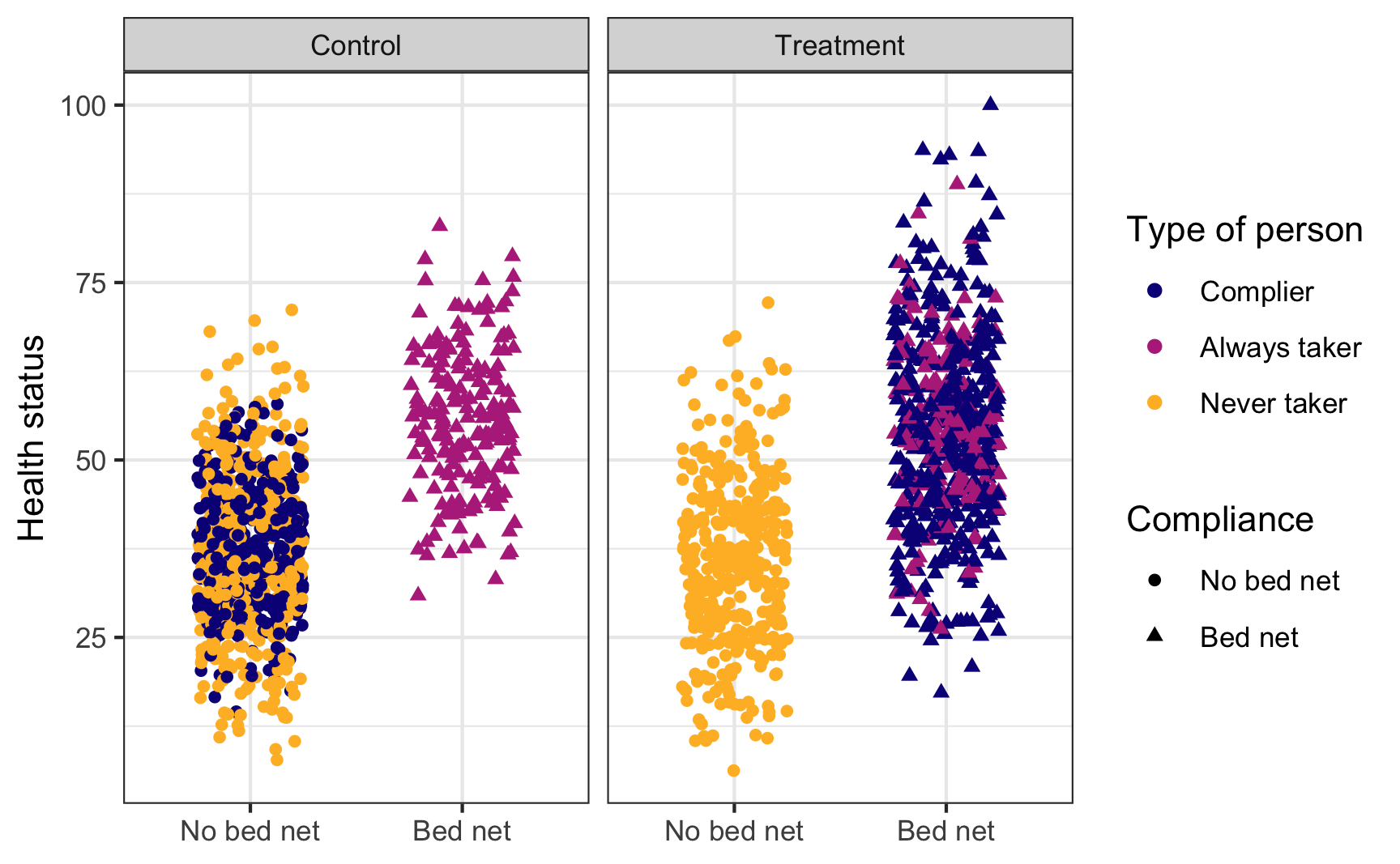 We can simplify this to this acronymized version:

The number we care about the most here is the CACE, which is stuck in the middle of the equation. But we can rescue it with some fun logical and algebraic trickery!

If we assume that assignment to treatment doesn’t make someone more likely to be an always taker or a never taker, we can set the ATACE and NTACE to zero, leaving us with just three variables to worry about: ITT, \(\pi_\text{c}\), and CACE:

We can use algebra to rearrange this formula so that we’re left with an equation that starts with CACE (since that’s the value we care about):

If we can find the ITT and the proportion of compliers, we can find the complier average causal effect (CACE). Fortunately, both those pieces—ITT and \(\pi_\text{C}\)—are findable in the data we have!

The ITT is easy to find with a simple OLS model:

Finding the proportion of compliers

The proportion of compliers is a little trickier, but doable with some algebraic trickery. Recall from the graph above that the people who were in the treatment group and who complied are a combination of always takers and compliers. This means we can say:

We actually know \(\pi_\text{A}\)—remember in the graph above that the people who were in the control group and who used bed nets are guaranteed to be always takers (none of them are compliers or never takers). If we assume that the proportion of always takers is the same in both treatment and control, we can use that percent here, giving us this final equation for \(\pi_\text{C}\):

It’s 14.4, which means that using bed nets increased health by 14 health points for compliers (which is a lot bigger than the 6 that we found before). We successfully filtered out the always takers and the never takers, and we have our complier-specific causal effect.

Doing that is super tedious though! What if there was an easier way to find the effect of the bed net program for just the compliers? We can do this with IV/2SLS regression by using assignment to treatment as an instrument.

Here’s a 2SLS regression with assignment to treatment as the instrument:

The coefficient for bed_net is identical to the CACE that we found manually! Instrumental variables are helpful for isolated program effects to only compliers when you’re dealing with noncompliance.