Roll six dice. You must keep at least one scoring die every roll. You must get at least 500 points before stopping and keeping the total. If you do not get 500 points, you get zilch (0) that round and the next person rolls.

After reaching 500 points, you can either stop, write down, and keep your score or continue to roll. As long as you can keep at least one scoring die, you can continue to roll and accumulate points. If you do not get a scoring combination in a roll, you lose all those points.

If you score with all six dice, you can pick them all up and continue rolling with them.

You can use probability math to calculate the chance of rolling at least a 1 or a 5 (so that you score something and can roll again). If you’re only rolling 1 die, the chance of rolling a 1 or a 5 is \(\frac{2}{6}\), or \(\frac{1}{3}\). When you start thinking about 2 dice, though, the math gets a little trickier because you care about rolling at least a 1 or 5, and there’s a chance you could roll both. So instead, we can calculate the probability of not rolling a 1 or a 5 and then subtract that from 1.

That means there’s a 55% chance of rolling at least a 1 or a 5 when rolling 2 dice. This approach scales up to any number of dice—multiply that \(\frac{2}{3}\) for each die included. For instance, here’s 4 dice:

We can generalize this by using exponents, where \(n\) is the number of dice you’re rolling:

Probabilty with math and computers

Doing that math by hand gets tedious, so we can put it in an R function and have R do the math for us.

Probability with computers only

Instead of figuring out the math behind the probability of getting at least a 1 or a 5, we can simulate a bunch of dice rolls and brute force our way to the answer. Here’s the general process:

Probably the most intiuitive (though not necessarily computationally efficient) way to do with with R is to use a for loop. In R, a for loop will will repeat some chunk of repeatedly until some condition is met, and that condition is generally tracked with an index variable that is specific to the inside of the loop. For instance, this loop uses an index variable named i. It will set i to 1 the first time it runs the loop and then do whatever’s inside (print(...) in this case). When it finishes the inside code, it’ll bump i up to the next number (2 here) and run the inside code again, and again, and again until it reaches the end of the index range (4 here):

To make this work with our dice simulation, we need to add one more component. We want to store the results of each loop run in a variable that we can use later. The most efficient way to do this is to create an empty variable first that has enough slots in it to contain the output, then add to that variable while going through the loop:

How does that compare to the official math?

It’s basically the same! But we found the answer without doing any actual probability math, which is neat.

We can generalize this simulation a little more by not hardcoding some of the parameters. We can make it so both the number of dice to roll and the number of simulations are adjustable by sticking this in a function. For example, here’s 4 dice 50,000 times:

Why even do this?

But we know the probability equation for getting at least a 1 or a 5, so why go through the hassle of making the computer roll millions of dice? Because we’re not actually calculating the true probability of scoring every valid scoring combination!

Phew! Now that we account for every possible scoring combination, there’s a 97.78% chance of scoring something when rolling 6 dice. That’s really high!

For fun, let’s look at how that probability changes as the number of dice you roll decreases: 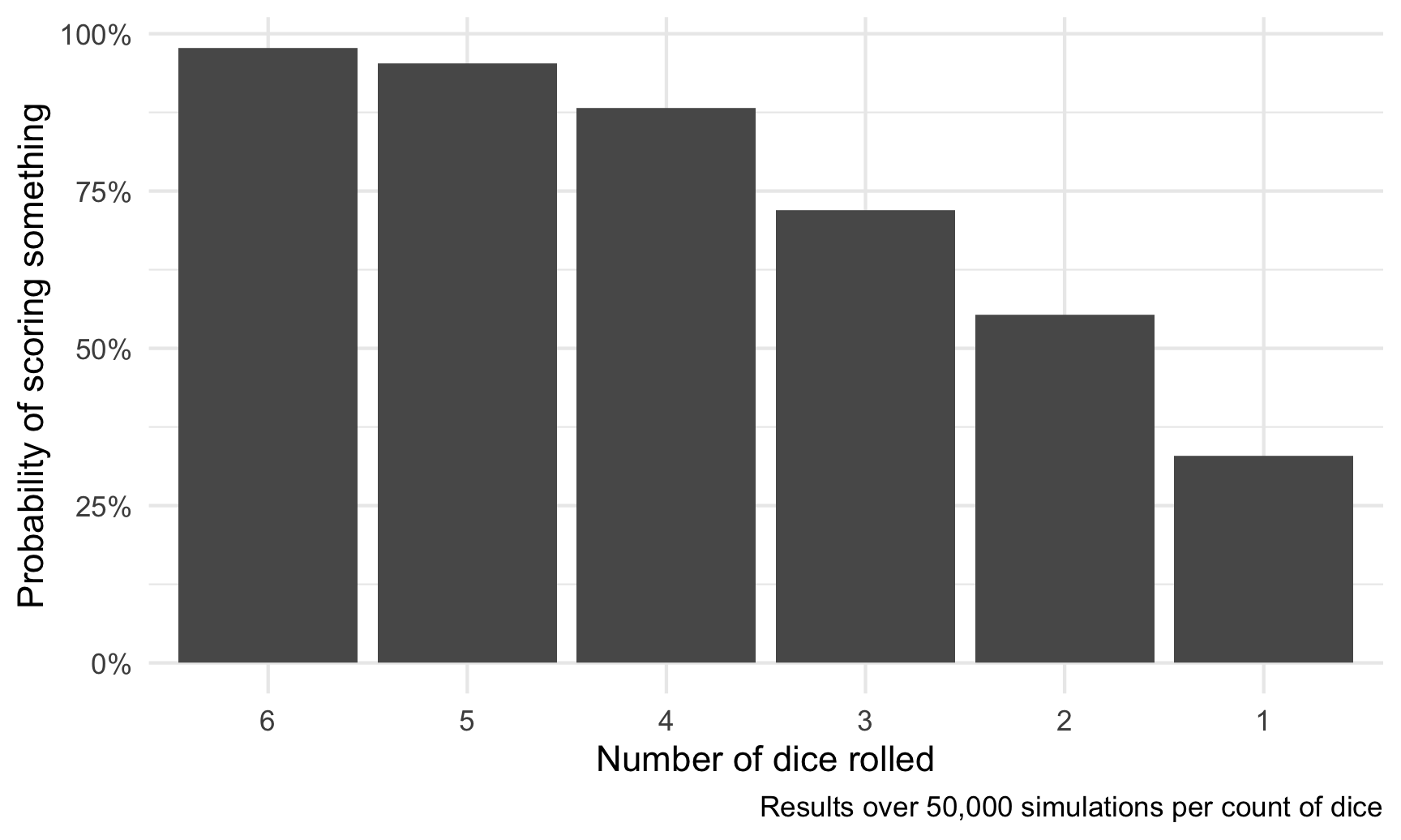